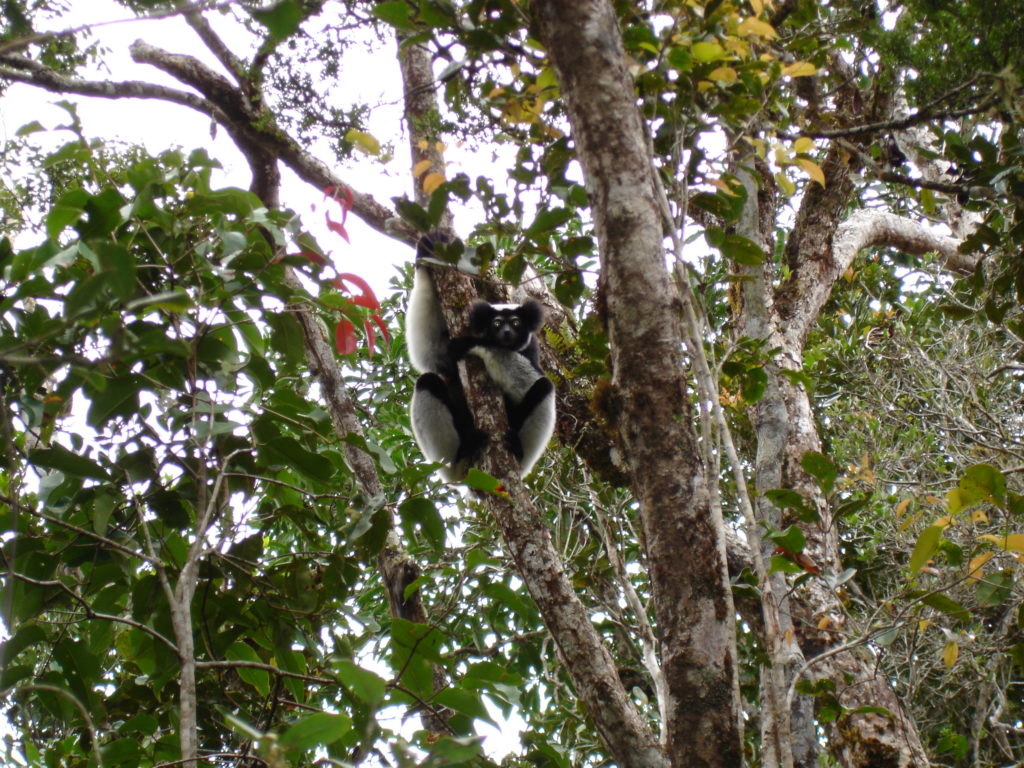 From March to August 2005 a diurnal lemur inventory commissioned by the NGO Man And The Environment, or MATE, was conducted in one of their management sites Vohimana, just east of resérve spéciale d’Analamazoatra in Madagascar. MATE is working on a project in Vohimana to restore the currently broken corridor of the eastern rainforest belt and until now there has not been any research on abundance and populations of lemurs in the remaining pocket of forest. 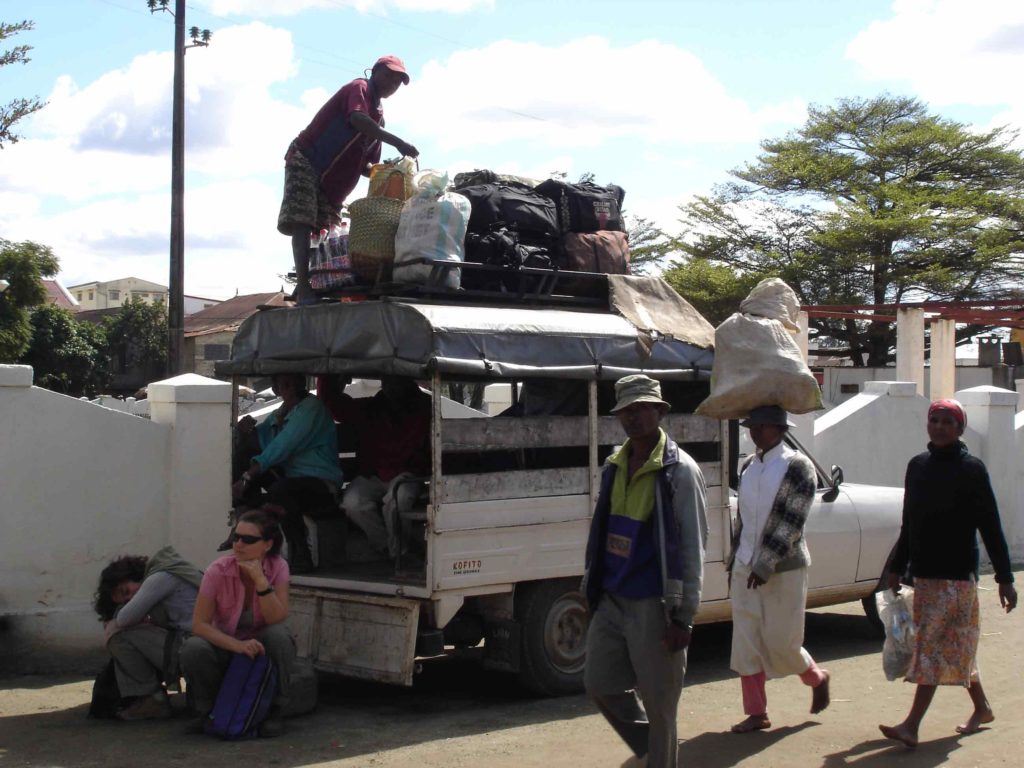 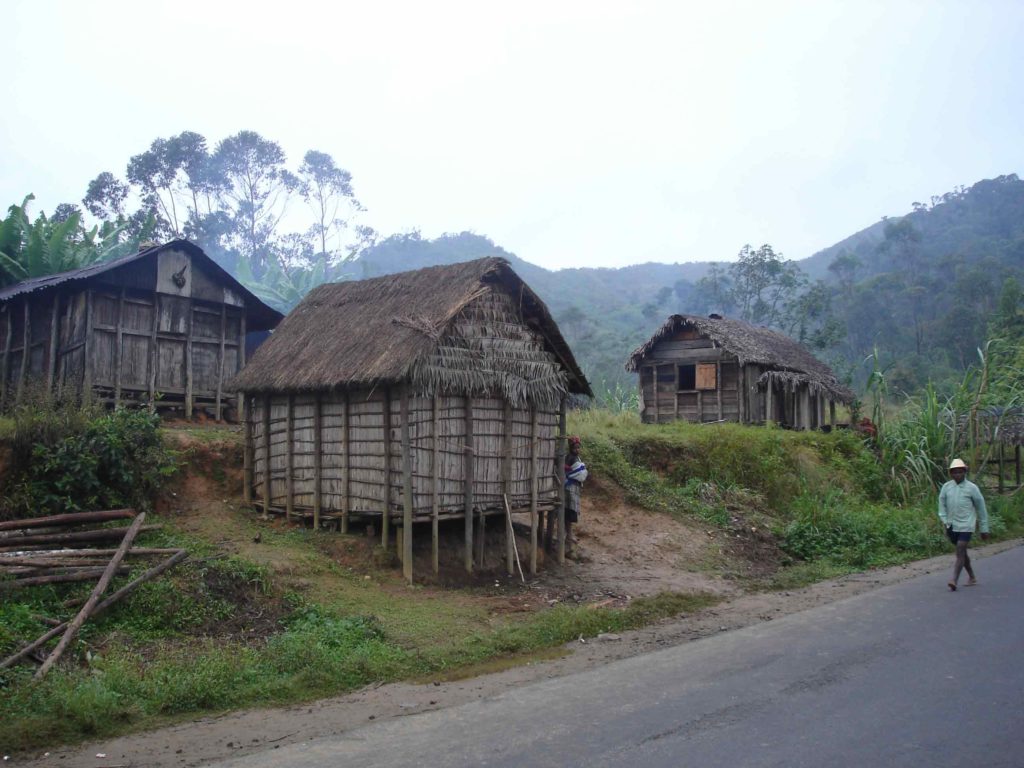 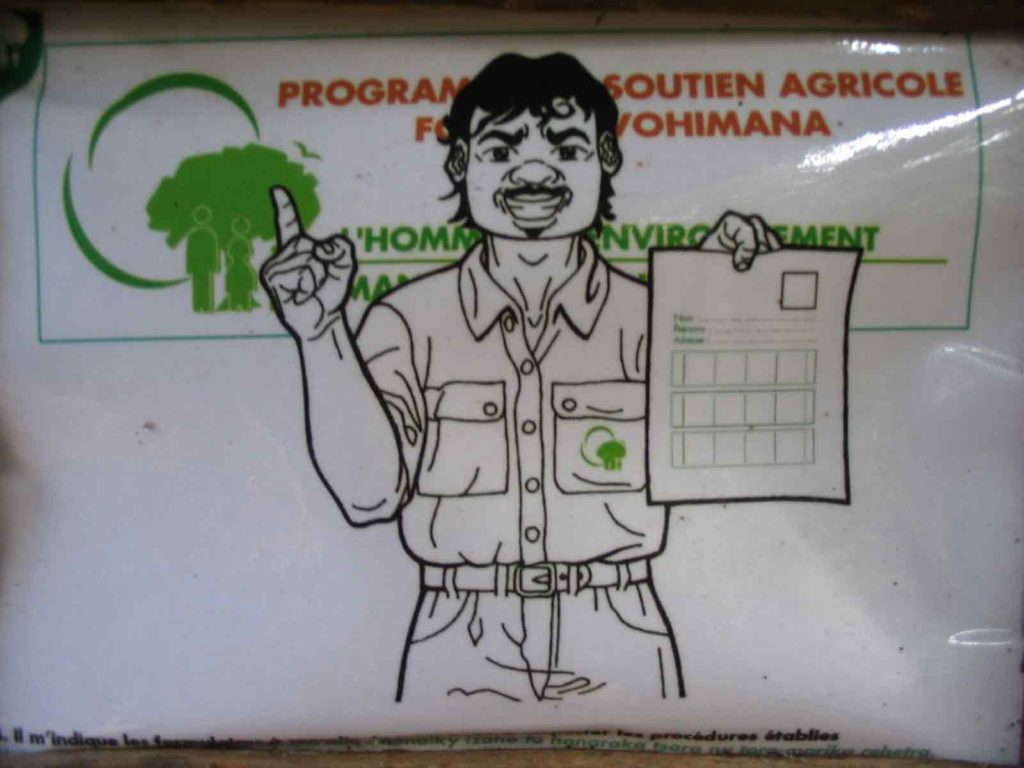 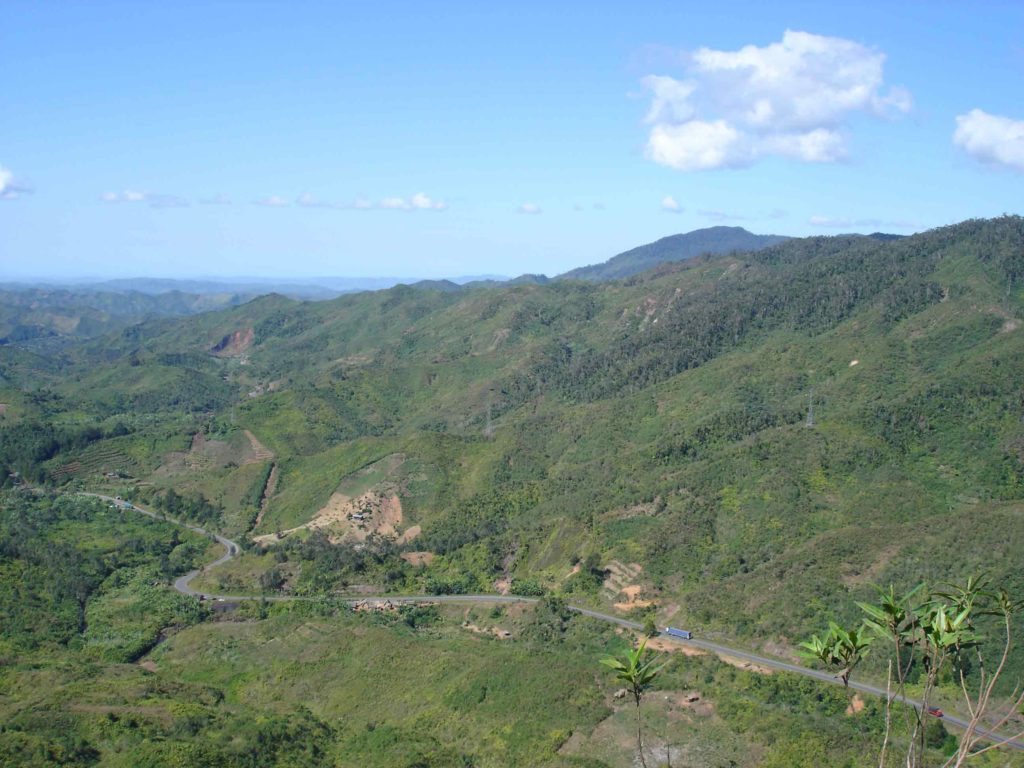 With a group of three students and with help of local guides the presence and abundance of lemur species were estimated using the line-transect method. Four existing forest trails with various lengths and leading through a variety of vegetation types, including degraded forest and eucalyptus plantation, were flagged with 50 meter intervals and their positions were pinpointed with a Global Positioning System. 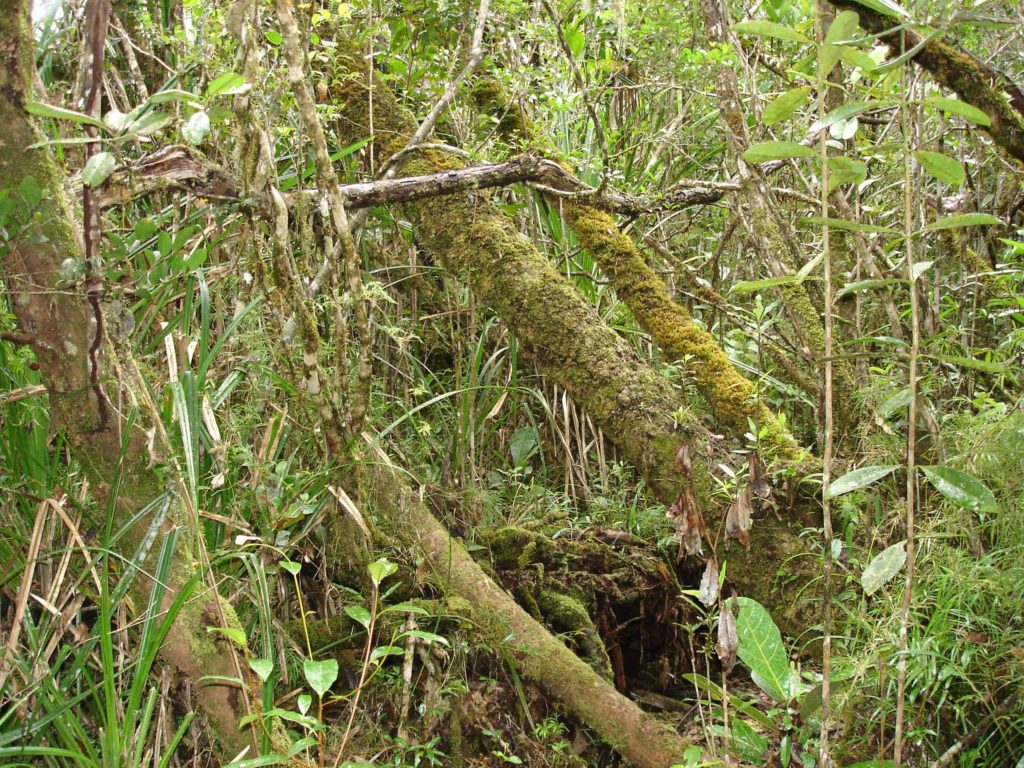 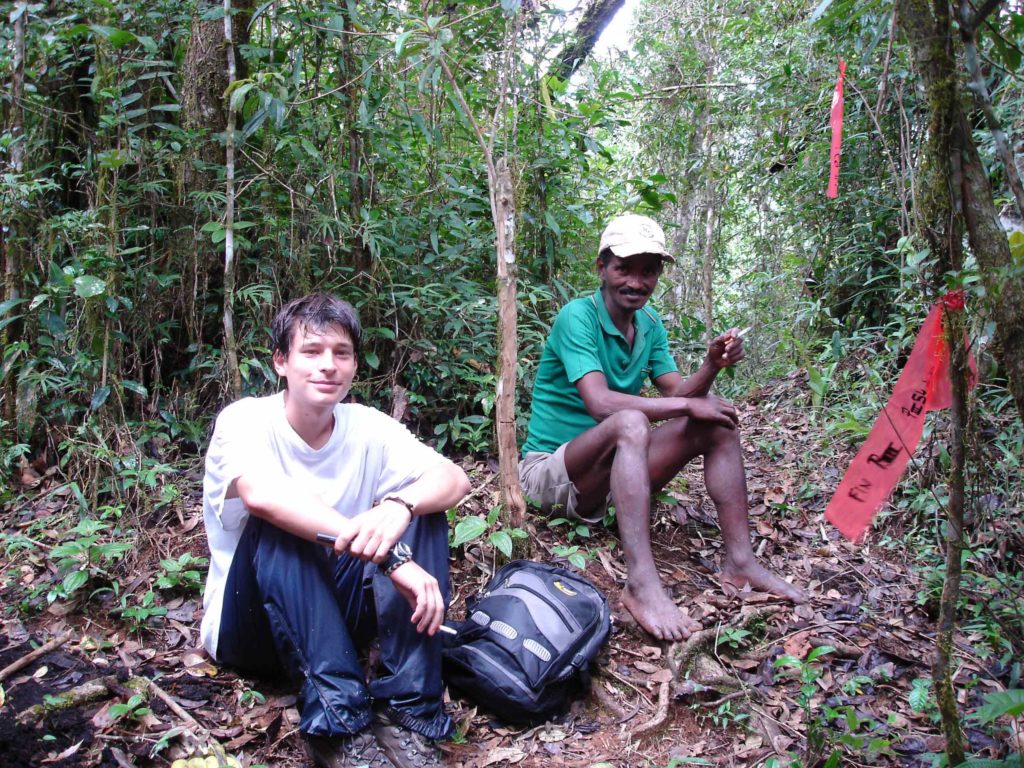 Thereafter these transect trails were surveyed regularly with groups of two people looking for animals and gathering as much data as possible. With this data maps were made to determine the locations of the different groups and density estimates were made. Six lemur species were recorded; Indri indri, Propithecus diadema diadema, Eulemur fulvus fulvus, Hapalemur griseus griseus, Eulemur rubriventer and Varecia variegata variegata. In a total of 278.25 survey hours 197 individuals were recorded in 88 groups. Nearly half of this was Indri indri. Average group size is highest for Eulemur fulvus fulvus with 3.38 individuals per group. Average group size for Eulemur rubriventer is the lowest with 1.5 animals per group. Although this research is not extensive enough to determine an accurate estimation of the actual number of groups, absolute density in animals per square kilometer was estimated. Relative densities in recordings per hour of survey and recordings per kilometer of surveyed transect trail were also calculated. Species accumulation graphs per transect trail were also made. 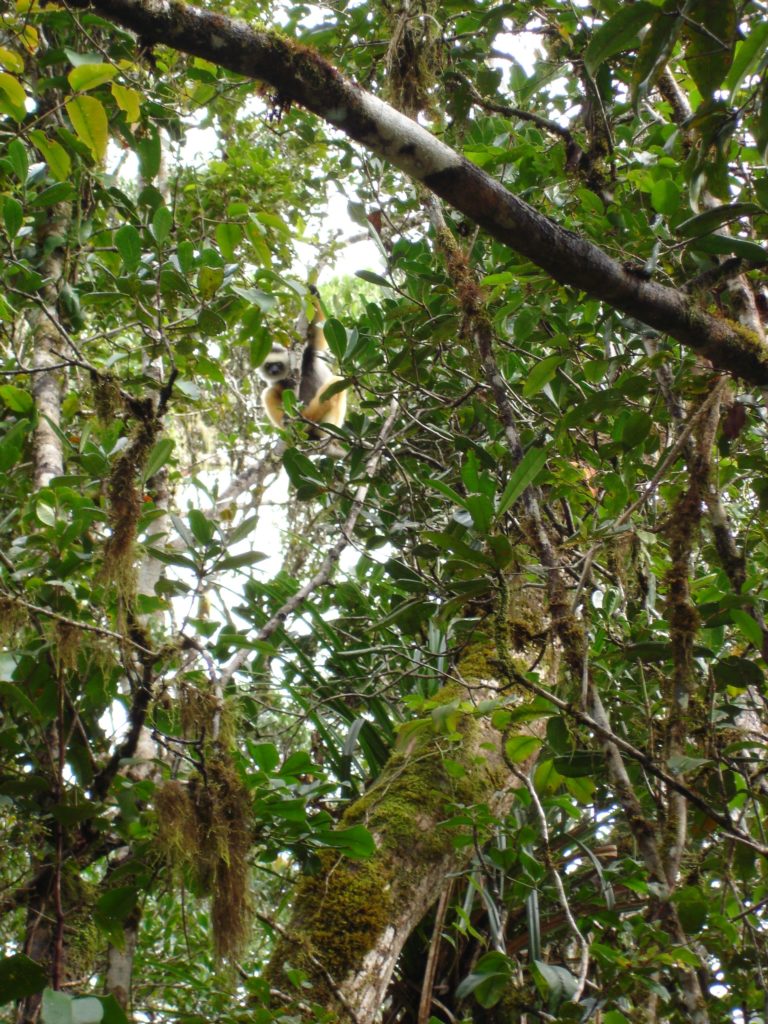 Species richness is highest on the trail with the most natural forest cover (all six species) and the eucalyptus plantations and degraded areas are home to only the two most adaptable species Eulemur fulvus fulvus and Hapalemur griseus griseus. Over time the unhabituated lemurs in Vohimana became more adapted to seeing humans, especially some Indri indri groups seemed quite habituated coming on to the end of the research. Indri indri appears to be the most common and is the most easily observed species. Propithecus diadema diadema is also quite common and after Indri indri the most recorded lemur. Eulemur rubriventer is very rare and was only observed twice. Varecia variegata variegata is also very rare and was never observed but heard only a few times. 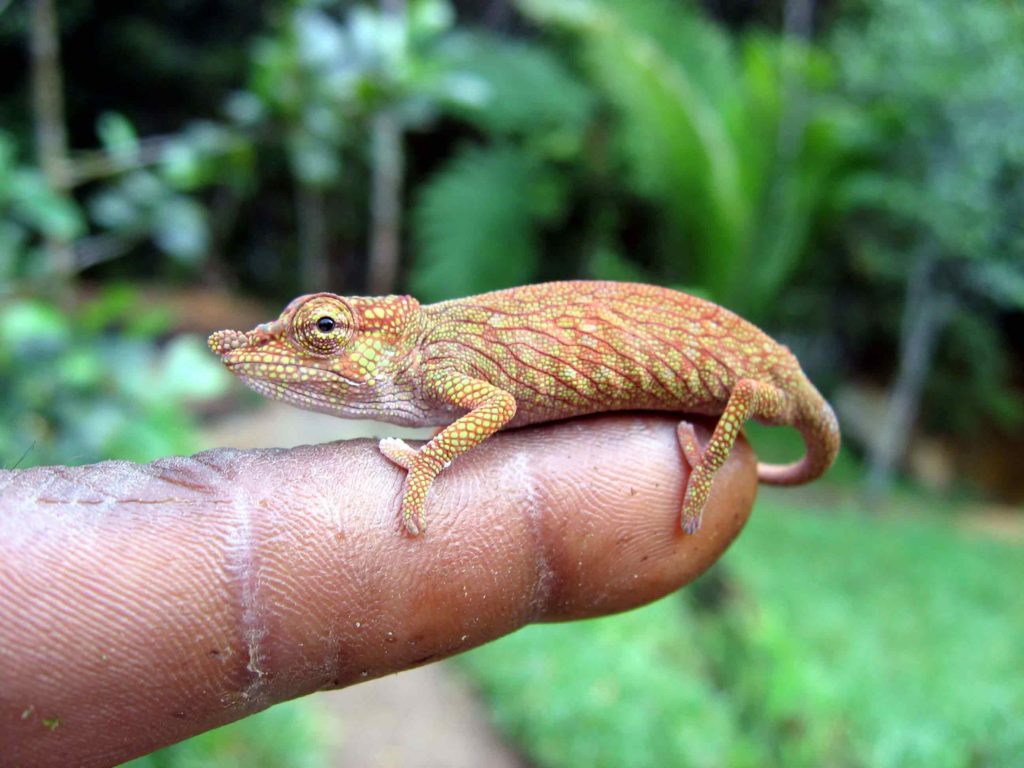 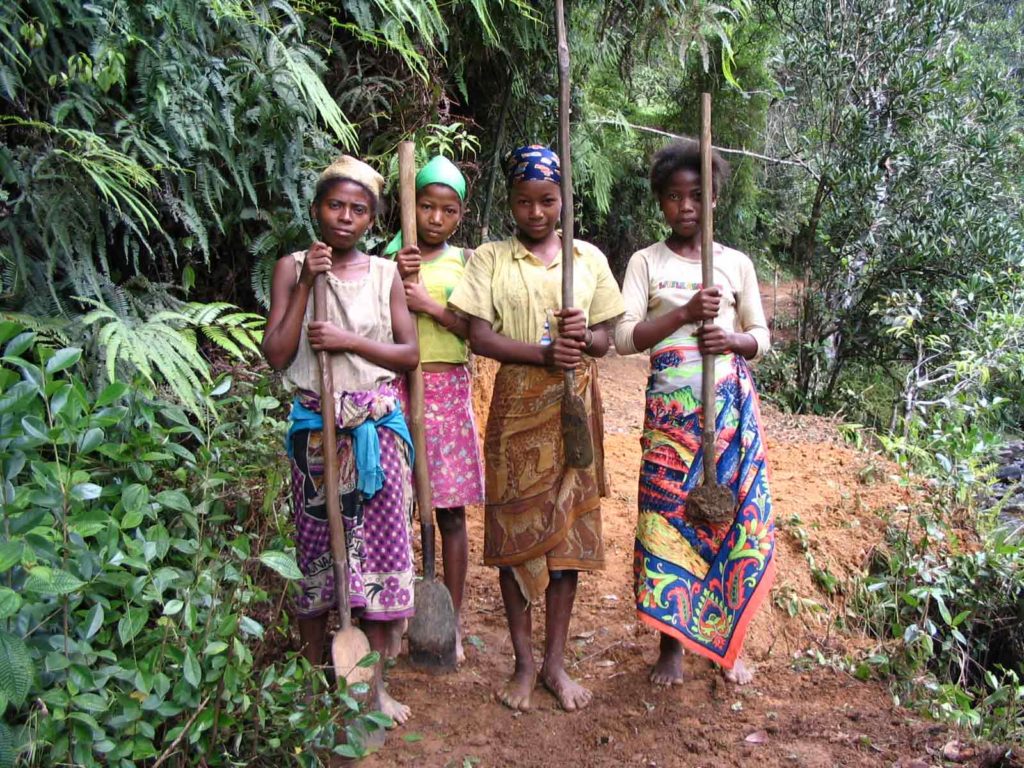 Further research and conservation efforts are necessary to ensure the long term protection of the lemurs in Vohimana. Forest product extraction, encroachment, trapping and forest grazing still occur and form a threat for the remaining lemurs stuck in this isolated pocket of forest. Local people should be helped and stimulated to change their habits and turn to more sustainable alternatives. Tourism can also be a key factor and generate income for conservation and development activities. It is unclear whether the relatively small lemur populations in these remaining pockets of forest can be sustainable. A fresh input of new genes to ensure a healthy gene pool within these populations or an expansion of the current forested area or connection to other forests might be needed. If a good estimation of the absolute densities and the viability of the lemur populations in Vohimana is wanted, more extensive research is needed.

This research was conducted by Sil Westra as part of a practical work experience for BSc. Forestry and nature management.